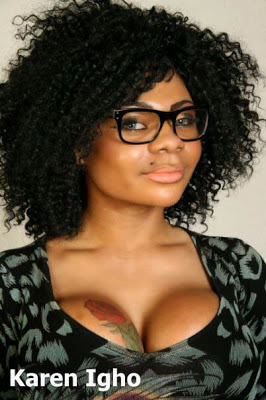 Karen Igho's PR team released a
press statement today
claiming that the BBA winner
got breasts implants many
years ago because of lumps
found in her breasts - this is in
reaction to a tweet from
Ghanaian actress Yvonne
Nelson's twitter handle during
the twitter hacking brouhaha
that occurred yesterday. See their press
release below
Sometime yesterday whilst
preparing for her promo
photo shoot, Karen and the
World PR Media camp got
wind of a tweet that was
sent to our client, Karen
Igho.
Yvonne Nelson quoted as
follows "fake boobs, no
wonder you don't have a
bf". When Karen got the
alert, she made several
personal gestures to
clarify the position of the
tweet and the tweetee,
but none of the enquiries
was answered and a claim
of 'handle hacking' was
implied by the Nelson camp.
Just to update the Nelson
team since we can't reach
you, Karen's resort to
breast implants were as a
result of lumps found and
removed in her breasts. And
can you also be a good role
model to your own younger
fans by resisting online
bullying or any other type
of bullying for that
matter.

That's an expert answer to an inersteting question

I have taken notice that in diigtal cameras, exceptional devices help to focus automatically. The sensors involving some diigtal cameras change in in the area of contrast, while others use a beam of infra-red (IR) light, especially in low lighting. Higher spec cameras occasionally use a combination of both systems and will often have Face Priority AF where the dslr camera can See' your face as you concentrate only on that. Many thanks for sharing your thinking on this blog.