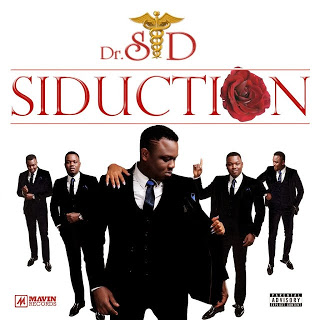 Lagos, Nigeria October 10, 2013 – MAVIN RECORDS
is thrilled to announce the Track List of Dr. SID’s
much anticipated sophomore album titled
“SIDUCTION”. This album follows the overwhelming
success of his 2010 debut album “TURNING
POINT”, which featured the hit songs “Something
about you”, “Pop Something”, “Winchi Winchi”
and “Over the moon”.
The album title “SIDUCTION” is an infusion of Dr
SID’s Persona into the word “Seduction” and is
defined as “The art of charming someone and
appealing to their senses through Dr SID’s music”
“SIDUCTION” is a testament to Dr. Sid’s evolution
as an artist. It has a variety of influences
including Afrobeat, Pop, Hip-hop, RnB, Dub-step,
Dance, Trance, Dancehall and soul, all blending
beautifully into an AfroPop Naija sound that is
uniquely Dr SID.
Tracks of particular interest include the
motivational “Surulere”, the comical “Chop Ogbono”
and the lyrically brilliant “Kilonwa”.
The album also features special guest appearances
from Don Jazzy, Tiwa Savage, Emma Nyra, Ice
Prince and Alexandra Burke. Production credits
include super producer Don jazzy, BabyFresh and
Altims for Mavin records and BlayzeBeats for Zero
Gravity productions.
The album has 17 new tracks and a run-time of
62 Minutes. It will available for pre-order soon and
lucky fans can get early digital copies from Dr
SID’s Facebook Page (http://bit.ly/siduction)
In true Dr SID fashion, the album takes you on a
Journey of pure unadulterated musical pleasure.
Track List
1.Surulere ft Don Jazzy
2.Princess Kate
3.Nwayi Oma ft Emma Nyra
4.Lady Don Dada
5.The 'D'
6.Talented
7.The Chicken & The Egg ft Don Jazzy
8.Oyari ft Tiwa Savage
9.Dr. Lover ft Ice Prince
10.Baby Tornado
11.Kilon Wa
12.Chop Ogbono
13.Love Mine
14. Get Over Me
15.Last Bus Stop
16.Siduction
17.Baby Tornado Remix ft Alexandra

Fantastic beat ! I wish to apprentice while you amend your web site, how can i subsbrice for a blog website? The account aided me a applicable deal. I have been a little bit acquainted of this your broadcast provided shiny clear idea

If not for your writing this topic could be very contlouved and oblique.

<a href="http://jgbhyla.com">Uneeviblable</a> how well-written and informative this was.